When we first started talking about getting an RV, one of the things that made me nervous is the towing. I haven’t towed yet. I know I need to even if my husband does the driving because something could happen. So, we record everything as a resource for me in case I have to do it on my own. One of the videos is about getting diesel while towing. So scary. Up until recently, my husband filled up the truck before we left for any location. But we were about to go on the longest journey yet- 7 hours to The Keys. Yikes. So, we would have to get gas towing the fifth wheel.
Luckily, we saw a video by the RV YouTube channel Changing Lanes [“Save BIG on RV Diesel Fuel @ Truck Stops! | Full Time RV!”] Yes. We want to save money on diesel, but what got us was the ease of getting the gas. After watching their video, we immediately applied for the TSD Logistics card. We found out that they were hit with almost 500 applications so they didn’t know how long it would take to get it. All because of Changing Lanes’ video. Wow. 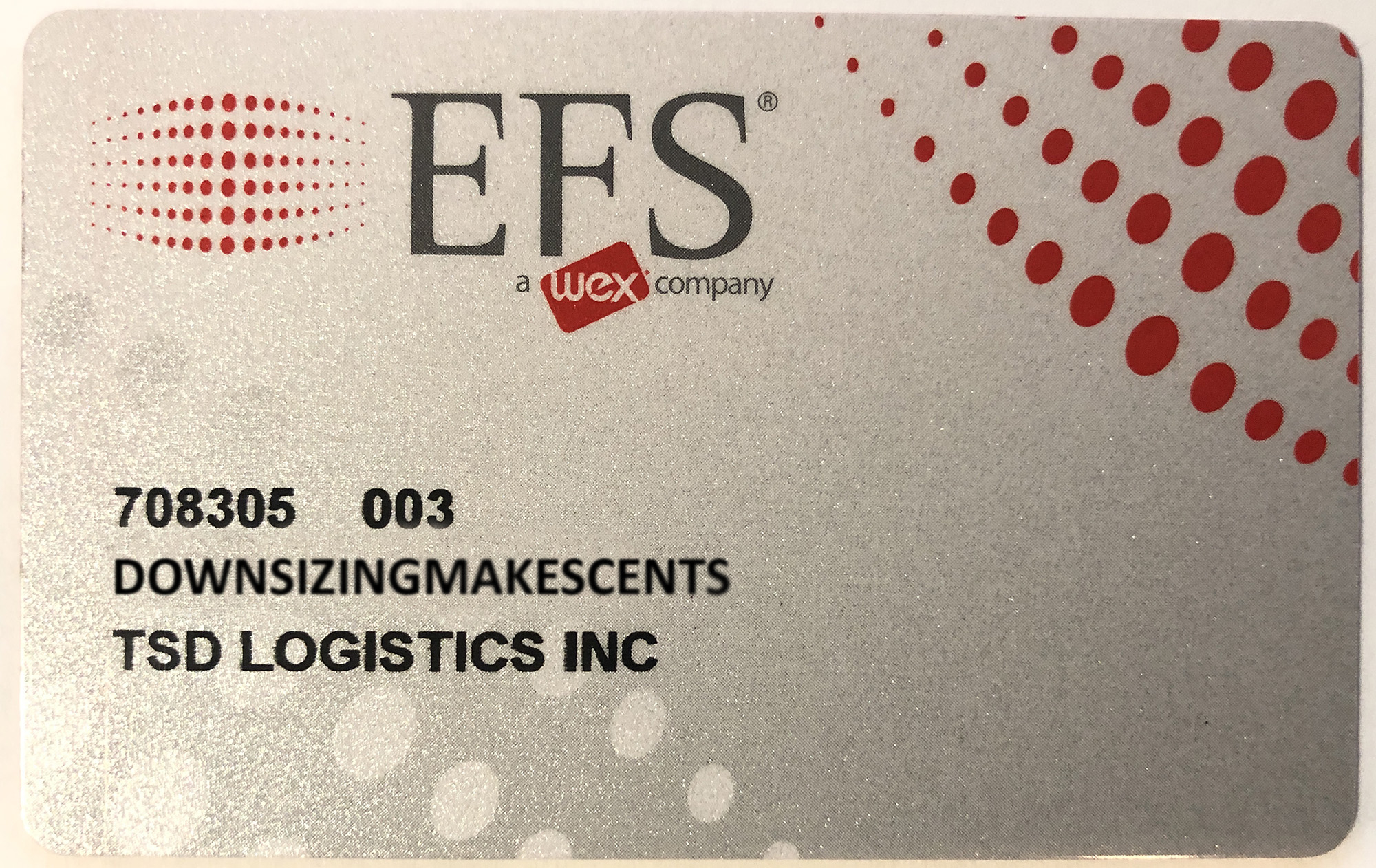 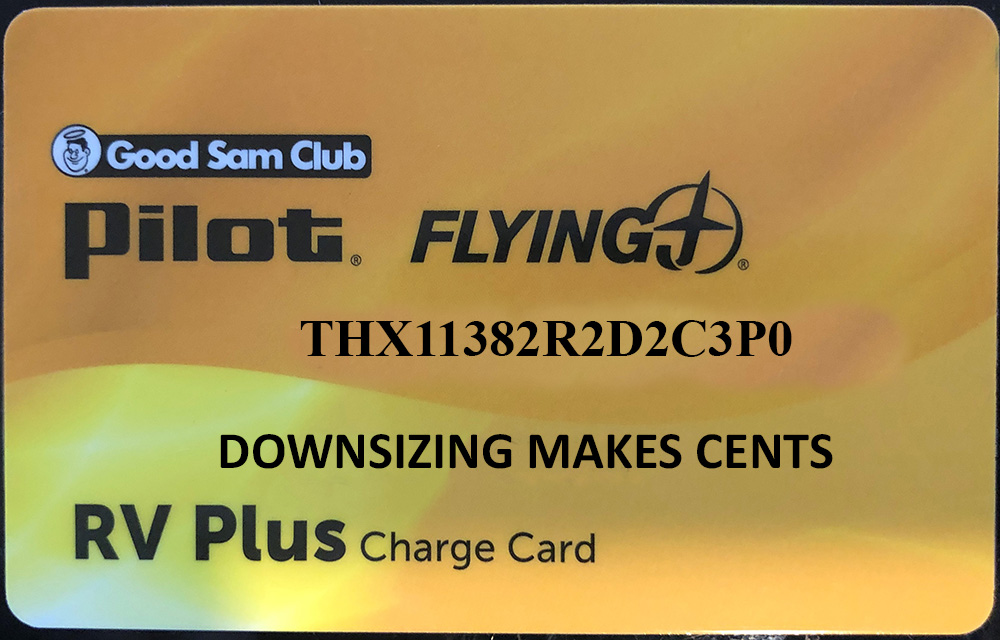 However, it didn’t take as long as we thought. We were thrilled and couldn’t wait to use it. It didn’t take long to get our chance. But here is where we messed up.
Tip 1- download the app before you go on a trip and play around with it. Get to know it..
Why? Well, our first time wasn’t exactly smooth sailing. We found the gas station on our route easily through the app- which I downloaded on the the way. The problem was we didn’t look for the trucker special entrance on the map. So, we pulled in the regular way. Yikes. This is exactly why we wanted the card! 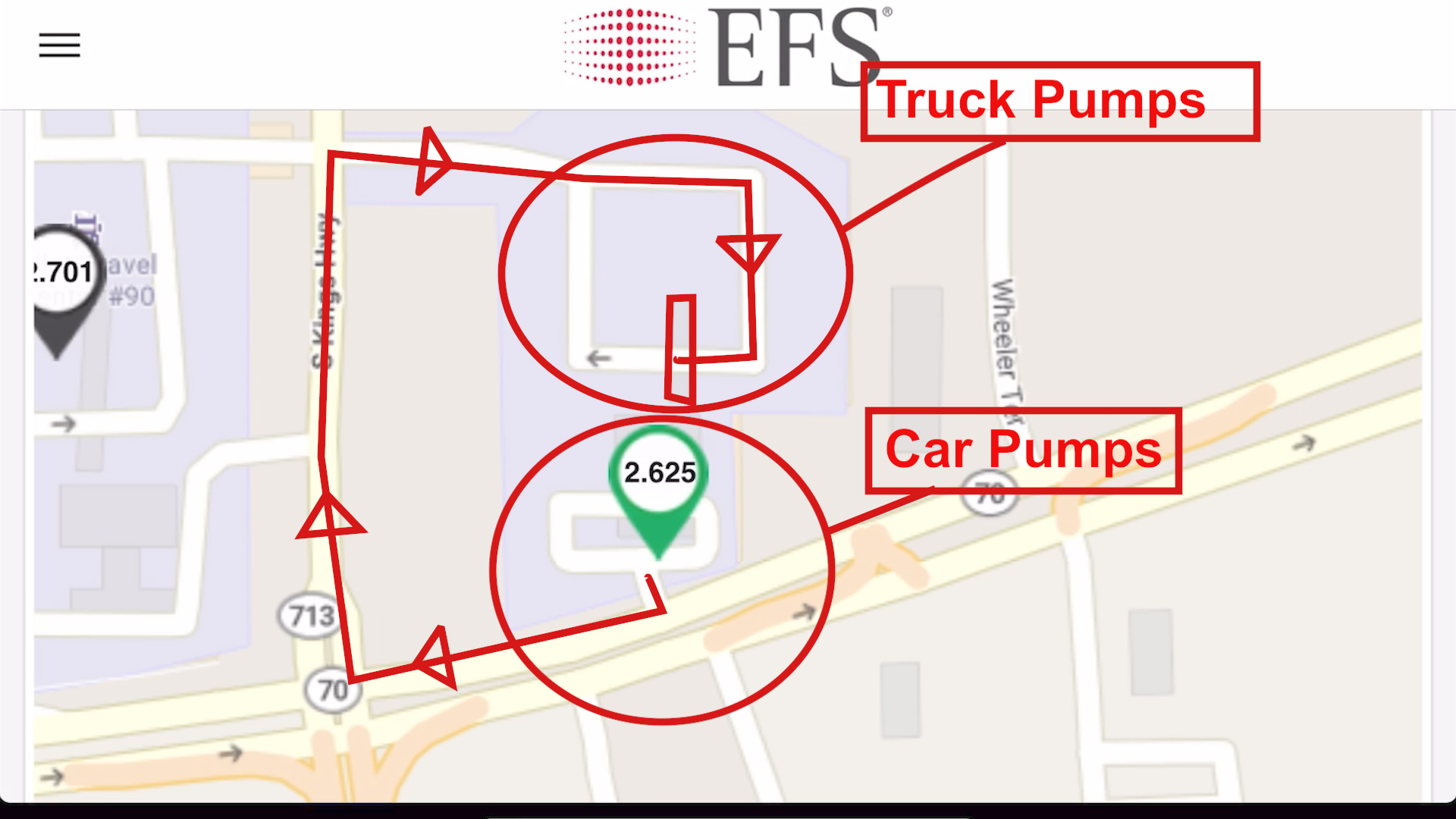 We saw a giant Class A with a towed. Actually, most class A’s look big to me. Luckily, we were able to pull out without too much fuss and follow the truckers to the correct area. So, no problems, right? Well, as we were pulling in ready to pick a lane, there was a trucker that seemed to pull out of the way and park. We thought that meant we should go ahead. Until we saw his face mouthing what I could only guess were some pretty serious explicatives. The arms waving around like one of those air filled advertisements at businesses gave us a hint too. There was a short stop and start until we just figured it was best we pull into a pump to get out of his way. We saw that he actually was trying to get into a weigh station. Who knew? 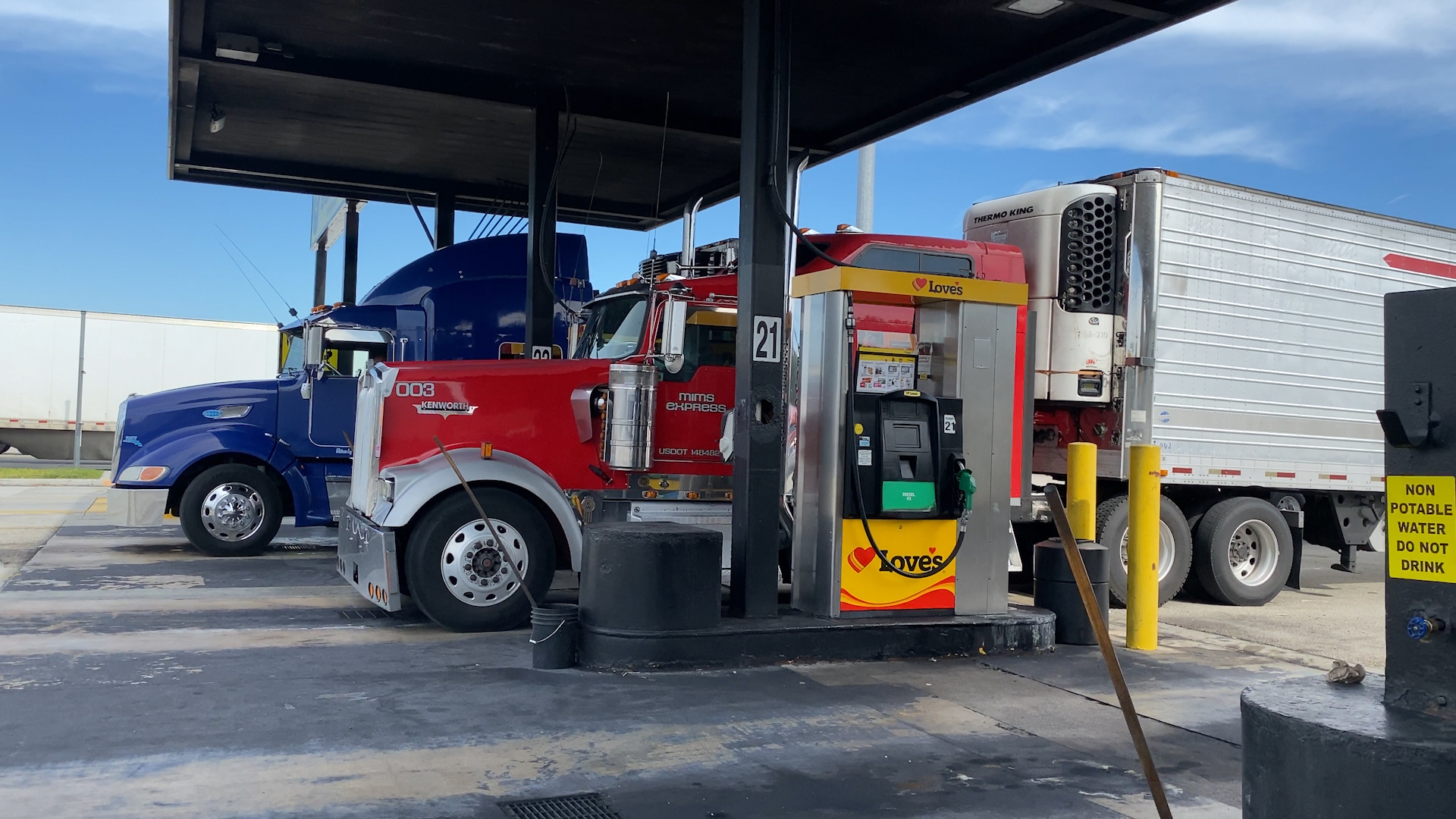 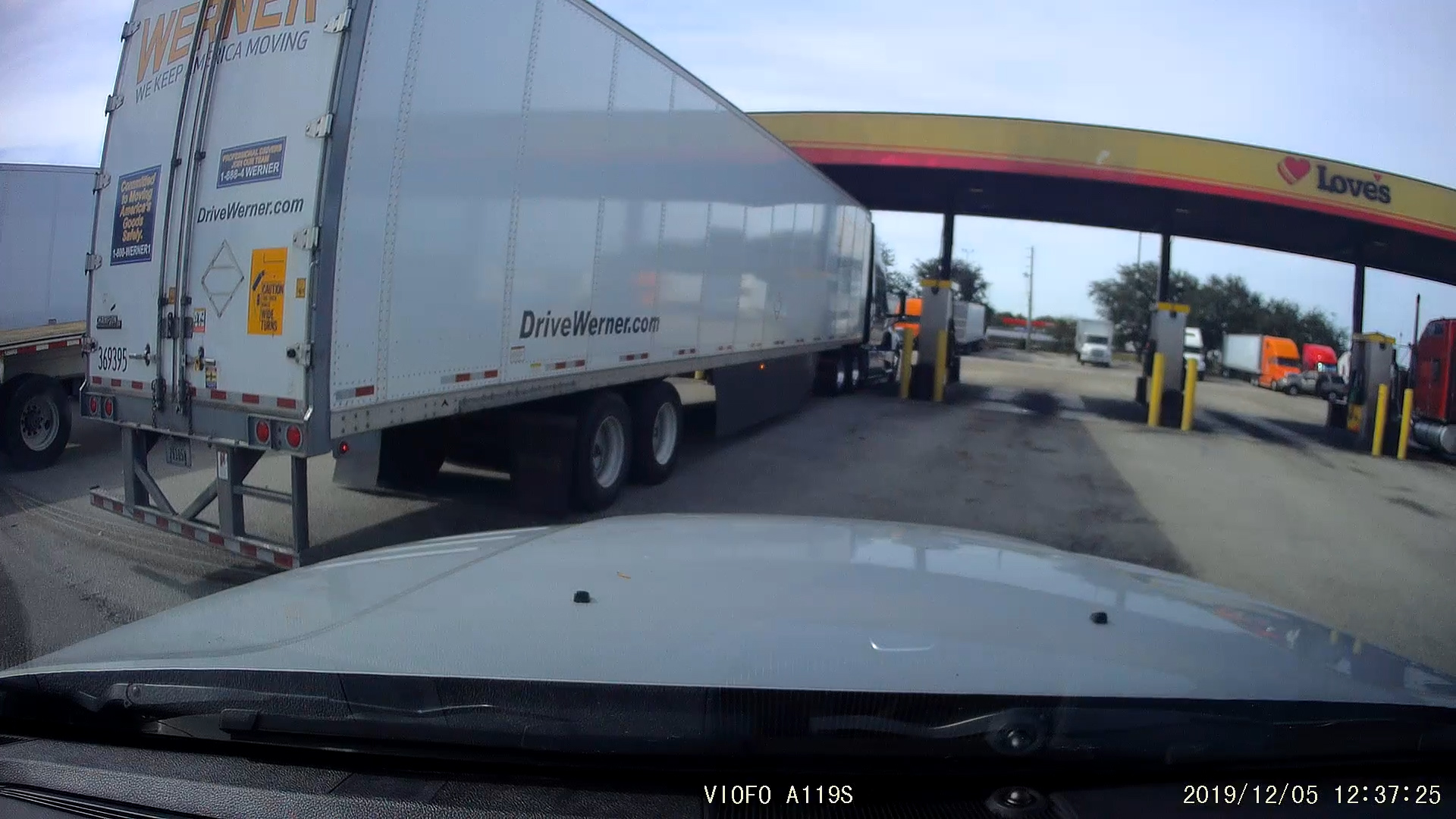 From there, we saw we were kind of unprepared in another way. You need the card but also a code. Luckily hubby took pictures of all paperwork so we found it..
Tip 2- Have your control number ready to type into the pump.
We also got some DEF. Another almost mistake? Hubby almost put it in the diesel tank instead. The separate hoses fit in both.
Tip 3- Make sure to take your time and put the hose in the correct tank.
Sounds simple enough, but we were rattled a bit. So, just take your time. Well, the deed was done. We survived. AND got a video out of it. On the way home from the Keys, we went to the same station and acted like pros- only our second time. Hah hah
So, I suggest to all that tow anything long and cumbersome- a boat, a trailer, an RV – to get one of these cards. Don’t take our word for it. Do your research. You won’t regret it. We don’t. Happy Trails, ya’ll. And remember, Downsizing “DOES” Make Cents Links to our other social media: IG: https://www.instagram.com/downsizingmakescents/ Facebook: https://www.facebook.com/downsizingmakescents/?modal=admin_todo_tour Pinterest: https://www.pinterest.com/downsizingmakescents/ Youtube: https://www.youtube.com/channel/UCh_0qAuir3s9Jho0B7ZTjHg TSD Logistics Fuel Card for RVs Link: https://www.tsdlogistics.com/fuel-card-application-rv/ Pilot RV Plus Card Link: https://www.rvpluscard.com/ We are a married couple in our mid 50s downsizing/selling our house so we can see the sights and enjoy every day- along with our two dogs, Scrappy & Chewie.